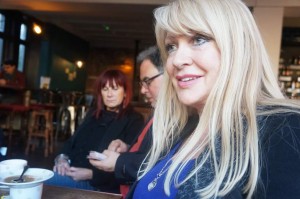 Boni Jane is an  English born singer/songwriter. She has published over 70  songs in a number of  genres including  dance, pop, folk, rock  and country.

– Measure of your Love- Knight of the Damned- Warner Music 2017

Although Boni is known for her folk ballads, she is able to embrace other genres including Dance, Pop and Country.

The simple and pure melodies of her ballads and plaintive sound of her voice resonate from the heart. While many of Boni Jane’s songs are reminiscent of songs of the seventies they evoke real emotion about true life experiences.

Two of Boni’s songs SPECIAL  DAY and MEASURE OF YOUR LOVE have reached an international audience  – being added to the international playlist of songs played at ‘Wedding Moon’ ceremonies across the Caribbean.

Boni’s songs are published on the ‘Wesley’ Music media library and have been played at funeral services across the country including Mortlake and Guildford Crematoriums.

She has appeared on ITV prime time television as a personality in Kensington Wives and which has been aired many times.

In 2007 she adapted some of her songs into a Musical “Who’s that man?” – a Romantic comedy which has been performed in intimate venues in London. It encompasses a storyline that now links to even more of her songs.she has published a play which has been performed at a number of venues in a regional tour including Ginglets in London’s Shepherds Bush.

Boni is a wonderful lyricist – having written songs about well know performers (such as Joan Collins] and published a book of uplfting Farewell odes for use at funeral services bringing smiles to families.